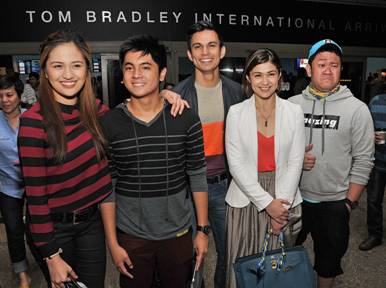 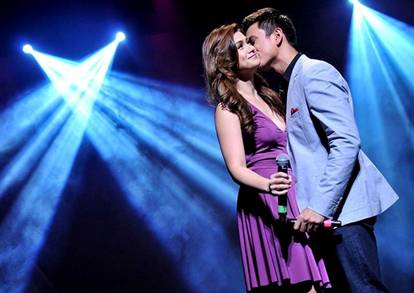 (photo courtesy of Sthanlee B. Mirador)

Featuring one of the hottest love teams on television – Carla Abellana and Tom Rodriguez, the show was an exciting Kapuso experience from beginning to end as the audience was treated to exhilarating performances and entertaining segments from their favorite GMA stars.

Carla and Tom, who were first paired in the internationally-acclaimed series My Husband’s Lover, exuded undeniable chemistry as they serenaded the crowd. Attesting to the popularity of their onscreen pairing currently seen in the romantic-drama My Destiny, their fans eagerly cheered on the pair all throughout their production number. They did not disappoint their fans as they performed thrilling duets and engaged in endearing banter.

“We had a great time performing in L.A.,” says Carla. “The crowd was very appreciative and it was nice to be able to put up a good show and bring a piece of ‘home’ to our fellow Filipinos in the US.”

It was also a homecoming of sorts for Tom as he was reunited with his family who came all the way from Arizona to support the Kapuso leading man. “Performing in this show was heartwarming for me because, not only was I able to share the experience with our kababayans abroad, I was also able to share it with my family,” he expresses.

Tom also gave the crowd a preview of his newest game show on GMA, Don’t Lose The Money, in a segment where two couples were called to participate in the game.

Carla and Tom were also joined on stage by some of GMA’s most versatile performers.

Actor-comedian Betong Sumaya portrayed his popular character Antonietta from the country’s longest running comedy show Bubble Gang. Betong elicited endless laughter from the audience with his comedic segment. Like Tom, Betong was also able to meet with family members whom he had not seen in a long time.

The crowd was also amazed with Asia’s Pop Sweetheart Julie Anne San Jose’s powerful vocals which were showcased in her lively song and dance numbers. Julie Anne has been one of the most requested performers in GMA’s international shows.

“The energy of the crowd was contagious,” declares the Kapuso singing sensation and Sunday All Stars mainstay. “It was definitely a lot of fun performing for the Filipino community in L.A.”

Meanwhile, fast-rising teen star Miguel Tanfelix, who starred in GMA’s top-rating primetime series Niño, also impressed the crowd with his dancing skills. In his first visit to the United States, Miguel was overwhelmed with the support from their fans abroad. “It was my first time to be part of a GMA Pinoy TV event,” said the Kapuso teen artist. “It was a great experience and I look forward to entertaining more Kapuso fans abroad in the future.”

The show culminated in a meet and greet with the Kapuso stars that had fans lining up for hours just to meet and take photos with their favorite artists. Following the hugely successful event, more Kapuso fans in different parts of the world have expressed their desire to see the GMA’s artists perform in their own countries.