Are We Still Human?

I read in a news article about this pedicab driver, who was in a traffic accident along Taft Avenue in Manila.  It is already a tragic news, but the saddest part was that no one tried to help him.  Not even one soul tried to give him a helping hand! There were a lot of passing cars, curious on lookers, and law enforcement officials, but no one tried to help him.  There was a nearby hospital not far from the site of the accident.  It was alleged that he was still alive for an hour or two, would he have been brought to the hospital swiftly, he could have survived.  But it took five hours before even help came, but by that time it was already too late.  No one showed compassion, care, or decency! With this tragic accident a life could have been saved, a wife lost her husband, children lost their father, a mother lost her son, a father lost his son, or a sibling lost a sibling.

Also in a similar case, but this time in China.  This was recorded in CCTV, and the video was uploaded in  You Tube a year or two ago.  A toddler got run over by a truck in a busy Chinese market.  The driver who ran over the toddler, did not even bother to look at the toddler he ran over.  Minutes have passed, passersby and vehicles passed and saw the toddler, but no one tried to help the toddler.  One kind old woman saw the toddler, and helped the toddler to get to the side, and then the mother comes.  Although we are not blaming the mother for the accident, but I am just saying that she could have better taken care of her child.  The truck driver who ran over the toddler, and immediately left the site, could have stopped and brought the kid to the hospital, and surrendered himself to the authorities.  The toddler died after a few days in the hospital, from the massive internal injuries she received from the accident.  Another sad incident where a life was lost.  Another incident that could have been prevented.

My question is this! Are we still human? Are we not better than lowly animals? Is modernization, technology, and distrust pushing our emotions aside? Where is the compassion? The care? The human decency of helping someone who direly needs it? How can we say that humanity or the human race has advanced by leaps and bounds, if some of us have reverted back to their animalistic behaviors? We can truly say that we have advanced, if we can still show compassion, care and human decency, coinciding with advancement.

Please remember people are human beings! They are not androids, robots, or inanimate objects.  They have a father, a mother, siblings, wife, or children.  Please do not revert back to your primitive selves.  Remember the world needs heroes! Heroes not of the likes of Superman, Batman, Iron Man, Thor, Hawk Eye, Green Lantern, etc., but heroes just like you! Ordinary people who do extraordinary things, helping others, not thinking about their own safety or well being.  Those are the real heroes we need.  Be a hero today! 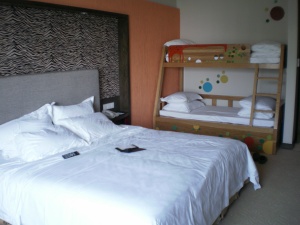 Our room at Chime Long Hotel

Upon the mention of Guangzhou, what first comes to my mind is affordable fashion, electronics, DVD’s, games, etc.  I wouldn’t have thought that Guangzhou would have a great hotel, theme park, and attractions.  Since I usually go to Guangzhou to attend the Canton Fair, all I see is the Canton Fair area, my hotel, restaurant, and nothing else.  We were introduced to this theme park, by Ocean Park Hong Kong.  Ocean Park Hong Kong, helped developed this marvelous theme park.

We took the inter-city through train from Hung Hom, which is located in the Kowloon Peninsula of Hong Kong, to Guangzhou, China.  We took the 10:42 am train, which would be arriving at the Guangzhou East station at around 12:30, which was exact timing, as our hotel reservation would be available by 2:00 pm.  We made a reservation at the Chime Long Hotel, which was according to their website, their premium hotel.  We also found out that the hotel had a complimentary shuttle service, from the 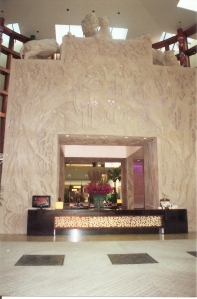 The Lobby of Chime Long Hotel

train station to the hotel, and back.  When we saw the hotel, we thought that we were transported to an exclusive South African hotel.  That was our initial thought as the hotel was made to appear like an exclusive Safari hotel.  The lobby was as grand as the exterior, there were no fancy chandeliers, but what replaced it was a huge pillar of rock, etched with animal like sculptures, which was incidentally the check in counter.  The hotel was so big, it had two wings, the old wing and the new wing, but as massive as the other.  We were assigned into the new wing, where you have to walk a bit to reach your wing, passing a mini waterfalls.  We didn’t expect that the rooms would be uber spacious.  In the middle of the room was the “Queen,” a queen size bed, that seems to look like 2 queen size bed, in which it could sleep 4 people.  While on the side of the room was a double deck bed, impeccably decorated with animal patterns, which was to sleep at least 3 children, as the lower bed would be able to sleep 2, and the upper bed 1.  The bathroom and wardrobe area, was equally spacious.  And there was a huge window, in which you could view almost the entire hotel complex.

Watch out for the Camels!

What we first visited, as suggested by the ticket counter lady at the hotel, was the Xiangjiang Safari Park.  Xiangjiang Safari Park is considered the largest animal park in Asia.  This park features animals in an open area setting, and features different animals, from all parts of the world.  There are Giraffes, Deers, Antelopes, Camels, Pandas, Wolves, Tiger, Lions, Elephants, and a lot more.  Besides the open area, the park offers an area wherein the dangerous animals are kept in enclosures for the safety

of the public.  The park also offers the public, to have interactions with the animals, wherein the public can feed the animals with a minimal fee, such as Giraffes, Tiger Cubs, Lion Cubs, Parrots, etc.  My son could not resist his excitement, that he asked me kindly pay for him, so he could feed a White Tiger cub.  Besides the Safari, and the zoo, the park also offers shows such as the epic story Journey to the West, featuring the Monkey King, Tripitaka, Sandy, and Pigsy.  They also have an Elephant show, wherein the Pachyderms performed various tricks.

We visited Chime Long Paradise, the next day.  It is a theme park dedicated to wild rides, with one even included in the Guinness Book of World Records for it’s 10 loops; shows, and kid’s amusement.  There are 8 different zones inside the theme park, offering everyone a different thrilling experience.  Among the areas we visited were the Action Arena, which featured a live, heart pounding, action blazing show, in where you seem to be experiencing a live action movie recording, with matching

explosions, and searing fire; Happy Kingdom, which is basically rides for kids and adults, wherein we tried the Sky Bike, in which you pedal to make the Sky Bike move, while hanging in mid air; Performance Centre Plaza, where the White Tiger Show was held; and a lot more.  We were suggested to go back to the hotel and have our dinner first, then attend the Chime Long International Circus during the evening.  Chime Long International Circus, has a variety of shows, with a variety of different performers, coming form all parts of the world.  There were also animal performers such as Black Bears, Hippopotamus, Chimpanzees, Orangutans, Pigs, Goats, and a lot more.

On our third day we visited the Guangzhou Crocodile Park, which features as the name imply, a large number of crocodiles.  These crocodiles are commercially farmed, for their meat, teeth, skin, and other organs, that can be used, either as medicine or ornaments.  We saw houses upon houses, teeming with different sized crocodiles, from juvenile to adult.  Plus they had a section where in crocodile eggs were incubated, until they hatched into baby crocodiles.  We also saw how they butchered the crocodiles, and take whatever they can from it.  It also features shows, such as the Sea Lion Show, and the Crocodile Show.  Plus there are parts of the park, wherein you can get photo opportunities.