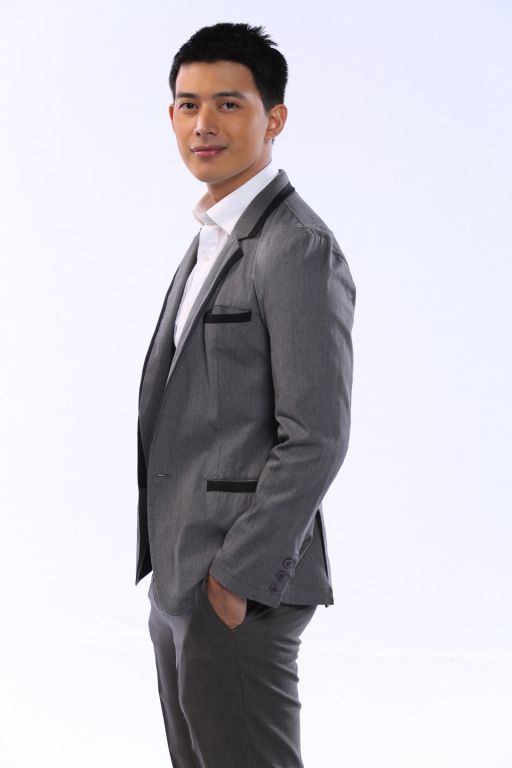 GMA Artist Center prime talents Louise Delos Reyes, Mike Tan, and Aljur Abrenica feel thankful and blessed for the overwhelming support of viewers and netizens from around the globe for their sirena serye Kambal Sirena.

#KambalSirenaUnangAlon Perfect! Kakaiba Ang storya. ! Kudos The Cast of This Serye. I salute The production of this Serye.

March 10, 2014
With the heartwarming support that Kambal Sirena is receiving, Louise, Mike, and Aljur share their appreciation and happiness. “I’m very thankful. Simula noong nag-umpisa kami ganoon pa rin sila, mainit pa rin ang pagtanggap nila sa Kambal Sirena. Lahat ng pagod at puyat namin talagang wort it lahat. Everyone shouldn’t really miss the upcoming episodes because aside from the original concept, Direk Dondon along with the production staff is really working hard on every detail of the soap, from the script up to the characters,” Louise said.

Metro Manila is going to encounter what I call a Traffic Tragedy.  This week work on the Skyway Project 3, which would connect South to North or vice versa, started already.  People and the Philippine government are panicking, as they are anticipating the head ache inducing traffic congestion that would ensue, as construction will be starting soon, and some of the roads are being closed/narrowed to make way for the project.  I do concur with the initial reaction of the public, but I would like to point out to the Philippine government, that there are a few avenues that can be explored, to lessen the impact of the major road projects that would last for 2 years or more.

Also the government could adapt what is already present in Europe, in developed cities, and even in our very own backyard.  What I mean is the rent a bike program and bike paths in major cities  overseas.  This would provide alternative mode of transport and at the same time a healthy way to exercise for the public.  Our very own Makati has a bike rental program in place already, which we can further enhance and replicate in Metro Manila cities.

Also we can use the existing transport facilities we have, such as the PNR (Philippine National Railways) train which plies from Alabang to Tutuban, the LRT, and MRT.  We just need to have it developed further, such as adding train service, frequency, and if possible add more carriages/cabins.

There is also another alternative mode, which is popular in the United States, which is the carpooling.  This would lessen the numbers of vehicles on the roads, and save more on fuel.  In the U.S. the system works like this, in a neighborhood one person with a vehicle(car/van) picks up those who joined the carpool, and brings them to a certain location close to the working locations of those who joined the carpool.  Each passenger either pitch in by paying for fuel, and other costs (parking, incidentals) incurred by the vehicle, during the duration of the carpooling, this is done on a monthly, weekly, daily basis, depending on the vehicles owners whim.  This can be done either one way or roundtrip, based on the agreement that was made.

There are various possibilities to explore.  The only thing that would make it all work is through the cooperation of the government, and the public.  Because if either one of them, does not do its part, then the whole system will not work, adding to more head aches for both parties. 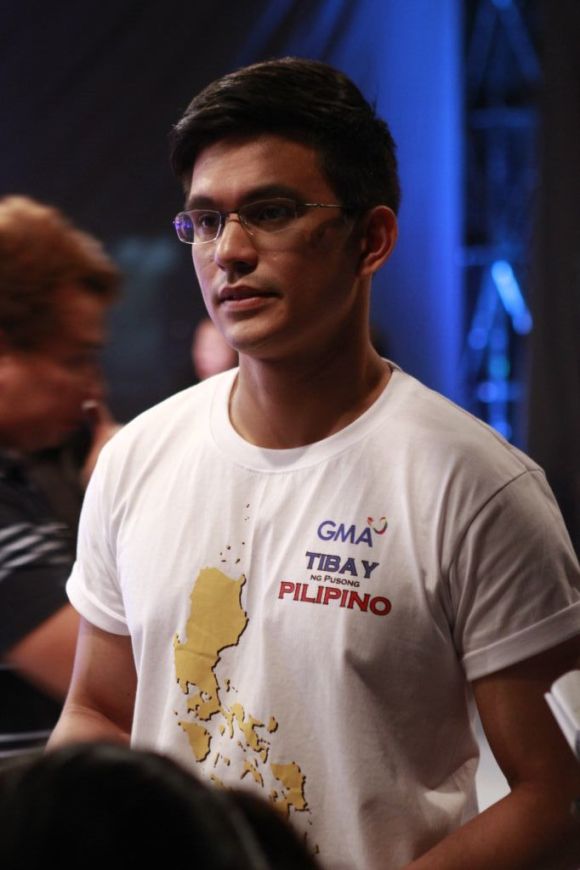 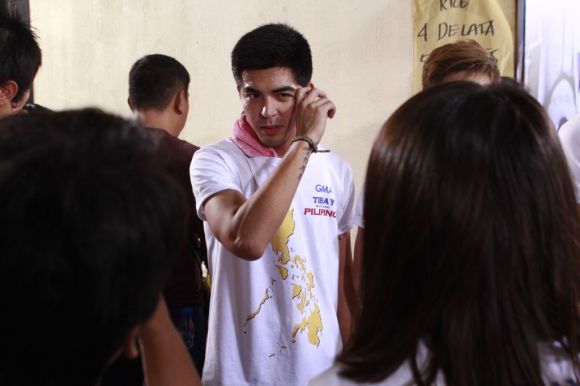 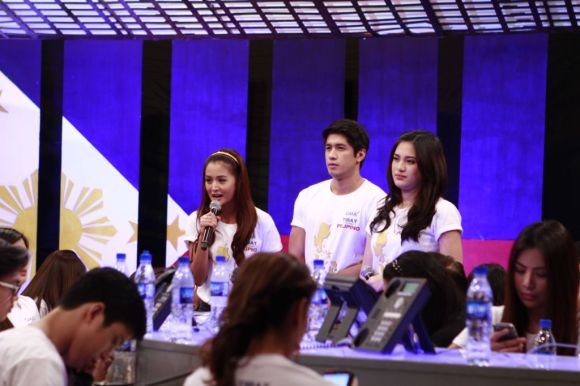 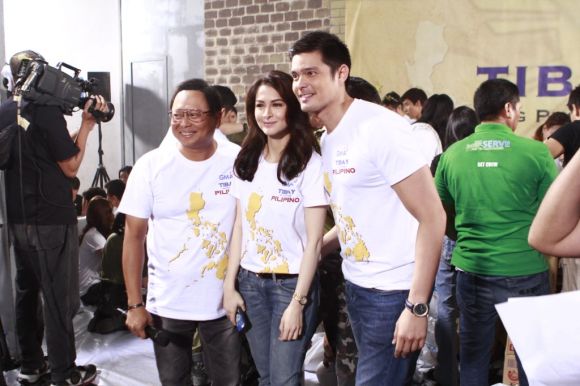 There is nothing more unique than the heart of a Filipino—soft enough to care for the weak, strong enough to rise up to the challenge. GMA Network knocks on this very heart as the country faces another great challenge—the nation’s survival and recovery from typhoon Yolanda.

With the joint efforts of GMA Kapuso Foundation and YES Pinoy Foundation, last November 17, the Kapuso Network invited everyone to take part in a one time television special aptly entitled, “TIBAY NG PUSONG PILIPINO, A GMA Telethon for the benefit of the victims of typhoon Yolanda.”

This special featured a powerhouse cast of respectable names in the music and showbiz industry, headlined by the biggest and brightest Kapuso stars, with the special participation of News and Public Affairs personalities.

Viewers got to see various Kapuso artists in heartwarming production numbers, live updates in the affected areas, and special activities (such as live telethon, and repacking of goods) all for the survival and recovery of the victims of typhoon Yolanda.

As of November 26, GMA Kapuso Foundation has received a total of Php166,083,570.95 in cash andPhp26,244,191.88 worth of in-kind donations. Total amount of donations is Php192,327,762.83.  Those who wish to extend financial aid to GMAKF may visit the GMA Kapuso Foundation website athttp://www.gmanetwork.com/KapusoFoundation.

We live in a Water World! 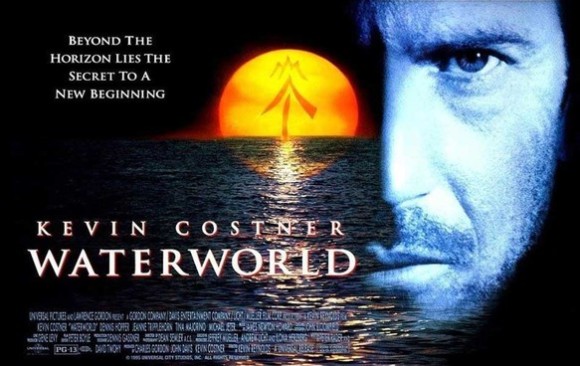 Have you seen the movie “Water World,” starring Kevin Costner? In the movie most of the earth was covered in water, and people had to adapt to living in a watery world.  The hero played by Costner was able to adapt to the changes in their environment, by growing gills like a fish.  Denoting living most of their lives amphibiously, part water, part air/land.  If you haven’t seen it, I suggest you do.  It’s a nice movie.

Are we going to adapt by having gills, like fishes? Problems like flooding is not only prevalent in the Philippines.  Thailand experienced one of its worst flood a few years back.  China and India has experienced flooding as well.

Are we experiencing the effects of Climate Change? Of Global Warming? Do we need to build another Noah’s Ark? Will we be experiencing rains for 40 day, and 40 nights?

What should we do? What is our part in the effort to address this problem? We need to conserve our resources, protect our forest, mountains, hills, etc., we need 3R (Reduce, Reuse, Recycle), we should not wantonly dispose of our garbage just anywhere, we should learn to segregate our wastes.  These are but some of the things that we need to do.  But we should diligently do it, if we don’t start with ourselves, then who do we expect to do it? We should lead by example!

This is my most recent personal post after a long long time.  I have heard a lot in the news lately.  Flooding in Metro Manila, Summary Execution here and there, Sinking of Roro Ferry, Sex for flight scandal, etc.  Why is all of these happening here and abroad involving the Philippines?

As for the flooding in Metro Manila, government departments have been pointing fingers here and there.  The Department of Public Works and Highways (DPWH) has been pointing the blame for the flooding, at The Metropolitan Manila Development Authority (MMDA), saying that MMDA has not done its part in cleaning of the sewers/drainage and canals.  In retaliation, MMDA is blaming the DPWH for the slow and inefficient installation/replacement of antiquated sewer/drainage systems by its appointed contractors and sub contractors.  Why can’t they just work together, in order to find a solution to the problem, that has beleaguered the citizens/residents, for a very long long time.  Instead of bickering with each other, why don’t they just team up and work together for the best solution!

As for the summary executions, I feel that those who do the summary executions, feel that they are helping the nation/community by killing criminals, or cleansing it of the dirt.  But why only pick pockets or snatchers are being killed? Why not go after the big time criminals and multiple offenders such as the killers, rapist, etc., if they are indeed trying to cleanse the nation/community? Or it could be the police authorities cleansing their plate, by killing criminal who could be associated with them.  But whichever it is, taking someone else’s life is not up to us.  Only the Creator has the right to do that.  Taking someone else’s life is a mortal sin, against mankind, and against God!

Sinking of the Roro Ferry, this type of disasters have been going on since time immemorial.  Overloading of passengers, poor maintenance of the marine vessels, overloading of cargo, fires, etc., are the common causes blamed on such sinking.  The question we should ask is what happens after? After the sinking, were the causes rectified? Were the responsible people penalized or imprisoned? The usual answer is no.  Which is why these types of disaster will keep on happening, as the persons held responsible for the disasters are not penalized/imprisoned or held liable.

Sex for flight scandal.  I have heard on the news, that these rumors of the said scandal has been rife for a long time.  Even when, Mr. Noli De Castro, was Vice President.  But are these rumors true? No one has been brave enough to surface as a witness, to prosecute or even implicate these government personnels.  If it is true, do these government personnels have no heart? To take advantage of people, especially women, who have already been abused and taken advantage of by individuals.  Do they want to further hurt or burden these poor poor OFW’s? Whose only wish or dream is to provide a better future for themselves and their family?

Is our world becoming too commercialized, insensitive to the feeling of others, that feelings of empathy, sympathy, and caring for others, are all gone and amiss? What is happening to our world? What kind of world are we leaving our kids, grand kids, and the future generations? I do hope that we would all be able to wake up in time, to rectify all of our mistakes, and give the future generations, including our kids, and grand kids a brighter future to embrace!

One such taipan is, Mr. Raul T. Concepcion, wants to bring about positive change to the community, the people, and the country.  To those who don’t know, Mr. Raul T. Concepcion, he has many business interest including Concepcion Industries, Condura, Concepcion Durables Inc., Go Negosyo, and RFM, just to name a few.  Most of his companies employ hundreds, if not thousand of Filipinos, and believes in the Pro Philippine Made products/goods, and services.  His advocacy group was known initially as Consumer & Oil Price Watch (COPW), which is now known as GOVT Watch http://govtwatch.net/index.html or http://www.facebook.com/raul.t.concepcion

The move was made in keeping with the times. GOVT Watch chairman Raul T. Concepcion believes that as the whole nation look forward to the fulfillment of the campaign promises of President Benigno Aquino III, COPW must evolve as GOVT Watch to expand its advocacy and work as an independent oversight in support of the new administration.

COPW, for over 20 years, has championed the cause of the Filipino consumer especially in the areas of power, fuel and the prices of prime commodities.

In the pursuit of this advocacy, it has become clear that REPRESSIVE GOVERNMENT POLICIES AND A LACK OF GOOD GOVERNANCE have been the greatest cause of the Filipino consumers’ plight.

His advocacies are in place to put multinational companies, government agencies, and the government itself in check.  Advocacies targeting the check on petroleum prices, energy prices, water distribution charges, transportation fares, toll fees, and election/voting systems, just to name a few.  All of of which affects the lives of millions and millions of Filipinos.  And therefore cemented Raul T. Concepcion’s desire to continue his advocacies, to help alleviate the lives of the Filipinos.

Twelve Filipinos reaped the harvest of their hard work and exemplary contributions to the Filipino-American community at the 2nd The Outstanding Filipino Americans (TOFA) in New York Awards held last October 27 at the Weill Recital Hall, Carnegie Hall New York.

Five community organizations were also given the Heritage Awards in recognition of their dedication and service to the community. They are the Association of Fil-Am Teachers of America NY-NJ; Ma-Yi Theatre Company; Philippine American Chamber of Commerce; the San Lorenzo Ruiz Choir of New York and the Philippine Nurses Association.

Mranola's Blog
Create a free website or blog at WordPress.com.