The Return of CAPTAIN BARBELL soon on GMA Pinoy TV!

All systems go for the much-anticipated comeback of the greatest Pinoy superhero before the month of March ends. Years after its original inception on television, CAPTAIN BARBELL returns – bigger, better and more star-studded than ever before. 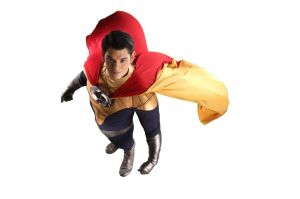 Richard Gutierrez reprises his role as Captain Barbell and his alter ego, Teng, and is now joined by a new league of extraordinary beings with unique superpowers. Fresh from the rousing success of Survivor Philippines Celebrity Showdown and his Valentine movie My Valentine Girls, the sought-after Kapuso actor once again dons the iconic red cape and protects good from evil.

“We’re all very excited to share with our televiewers the product of our hard work. If they were able to enjoy the original series, surely they’ll find the sequel more exciting. We incorporated a lot of high-tech elements, interesting characters, and bigger action sequences into the storyline”, shares Richard.

To match the powerhouse cast, this CAPTAIN BARBELL sequel will feature a highly-sophisticated production design courtesy of Australian production designer Peter Collias, who also designed for international blockbusters “The Matrix” and “Moulin Rouge”. The costumes, meanwhile, are manufactured in Hong Kong by Walt Disney costume maker Emily Lai of Cubedecor.

Premiering on March 30 on GMA Pinoy TV, CAPTAIN BARBELL will once again be directed by skilled director Dominic Zapata.

Be the first to start the conversation!